The electric bolt locks is an electric lock for glass door that drives the “locking tongue” to extend or retract by the on and off of the current to achieve the function of locking or opening the door, also called electric deadbolt lock and electric drop bolt lock.

Usually, an electric bolt lock consists of two main parts: the lock body and the lock hole. The key component in the lock body is the “lock tongue”, which cooperates with the “lock hole” to realize the two states of “close the door” and “open the door”. That is, the locking tongue is inserted into the locking hole to close the door, and the locking tongue is separated from the locking hole to open the door. Because of the retractable function of the bolt, it was named the “electric bolt”. It is also because of this feature that electric drop bolt locks are often used for glass doors and swing doors (two-way opening). At the same time, its “hidden” electric drop bolt lock installation features are more suitable for places with high-security requirements for locks and door access control systems.

1, How to choose electric bolt locks

Advantages: The advantage of the Dedicated electric bolt lock is that the difficulty of opening the door destructively, and it is more difficult to open the door forcibly.

Disadvantages: However, the wiring of such locks is more complicated. It is only from a professional manufacturer of automatic doors, and the price is relatively expensive.

(2), Non-dedicated electric bolt lock: which is a general ordinary electric blot lock, this type of lock can not delay the output of the door open signal, only the access controller (sensor) can send the unlock signal at the same time.

Electric drop bolt door locks are generally used for glass doors. According to the glass door with a frame or frameless, it is necessary to use the door clamps and other installation accessories.

One electric drop bolt door lock can only control one door, and the double glass door needs two electric deadbolt door locks. For most access control system projects, it is recommended to use the electric drop bolt door lock-fail safe, and the power supply can be disconnected when the access control system fails, and the fire protection requirements for power failure can be met. Some electric bolt locks have delay control and door magnetic detection function. The delay control function supports the delay after the door is closed for a certain period of time and then locks.

There are two wires ordinary electric blot locks and multi-wire electric drop bolt locks on the market. When the two core wires are energized, the current directly drive the coil to generate the electromagnetic effect. The electromagnetic force attracts the spring piece to control the iron core switch. It is easy to use heat, and the fluctuation of the current is easy to cause electric lock failure. The multi-wire electric drop bolt locks generally have microchip control, which not only has the functions of lock state and door state detection sensor, but also the operation of an electric lock is controlled by a single chip, performance, and reliability, it is recommended.

Some door access control system engineers don’t know whether to choose two-wire or multi-wire electric blot locks. In fact, the differences are:

Two-wire electric drop bolt lock, the internal structure is very simple, just a mechanism that drives the electromagnetic coil with current, the working current is large, and the heat is severe enough to damage the electric lock at a certain time.

How to determine the quality of the electric bolt lock?

After knowing how to choose the appropriate electric bolt lock, we also need to know the specific conditions from which to determine the quality of the electric plug lock, which is mainly determined by the following specific aspects:

The surface of electric lock for glass door should have a metallic luster, cannot have obvious scratches, standby current is about 300mA, the operating current is lower than 900mA. After a long period of power, the surface is slightly hot, but not hot.

The power of the electric drop bolt lock should be sufficient. After the pressure is pressed, the lock can automatically bounce and be powerful. It is best to perform 4,000 times of continuity test. If the lock is weak during the process, or the bounce is not in place, or the bounce If you don’t get up, it is considered unqualified

The diameter of locking tongue: 15-16mm is appropriate.

The frameless glass door lock can generally work between 10V and 18V. Some manufacturers can also achieve 28V. The power supply to the lock body can be continuously pressurized to test its high-pressure resistance value and test its temperature rise at high pressure, Can’t exceed 20 degrees, usually measured in about 5 minutes. The lock consume will produce a lot of power at startup and consume will reduce more than half of the power during standby.

Let the electric lock for glass door work in the opposite direction, when the plug is moved upwards, it is better to listen to the sound, and it is inferior; it is required to withstand the weight of 500-1000g or more.

Applying 200-300g force in the middle position of the popped tip (the direction of the force is the vertical direction of the tip), the tip must work normally; the lock can be manually shot to test the pop-up flexibility and restoring force of the plug.

Checking whether there is a plastic ferrule at the exit of the spigot, it plays a guiding role, and observe whether the spigot is inclined or biased.

8, The feedback wire of an electric bolt lock. 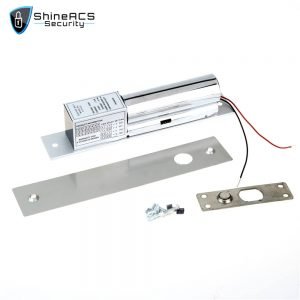 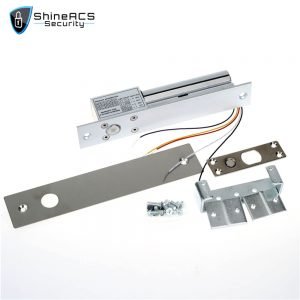 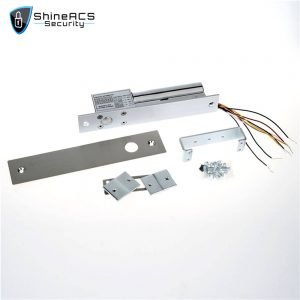 If electric bolt locks do not have a thermal fuse will cause the lock to burn out or cause more consequences when the temperature rises to a certain value, and the lock with the thermal fuse can interrupt the locked power supply at a certain value; The fuses are divided into one type, one is a common fuse, the fuse must be replaced after the dissolution, and the other is with a reset function. After the interruption, it can be restored after waiting for a certain period of time.